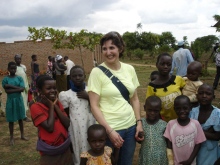 This photo from the Canadian Friends of Pearl Children Facebook page show founder Dvora Rotenberg in Putti, a village in the Pallisa District of Uganda. (Facebook)

An Ottawa woman is defending her organization’s work after the Canada Revenue Agency revoked its charitable status due to more than $167 million in false tax receipts.

Dvora Rotenberg launched the group, “Canadian Friends of Pearl Children,” in 2008 after she visited Uganda. She said she hoped to help children in Uganda and Western Kenya who were ill.

After seven years, Canada Revenue Agency revoked the organization’s charitable status last week because it “improperly issued receipts totalling over $167 million for purported donations of cash and pharmaceuticals, which were not legitimate gifts.”

The review showed CFPC paid $3.19 million of the more than $4 million in cash contributions to the promoters of a tax shelter donation arrangement called the Mission Life Financial Inc. Canadian Relief Program.

CRA also said the organization provided $163 million worth of tax receipts for the gifts of pharmaceuticals.

“The organization significantly over-reported the value of the alleged property, resulting in grossly inflated tax receipts to participants,” the CRA said.

Rotenberg said the issues arose from her ties with Mission Life Financial, a company “established to provide innovative financing arrangements for those Canadians wishing to make donations to charity,” according to its website.